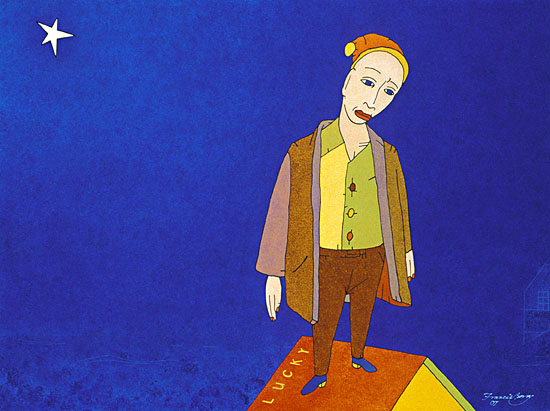 Lucky's clear-cut figure compartmentalized in black lines against endless shades of blue contrasts a Gothic self-portrait with a picturesque summer night. One emblematic, white star that borrows from the pop art idiom lights the nightscape. In this postmodern medley of art styles, medieval, romantic, and pop aesthetics meet on equal footing. The incongruous juxtaposition of a comic treatment of the artist against a lofty sky imparts irony to Lucky. For this is no Blue Boy in the grand manner, but Thomas Gainsborough's painterly blue-to-brown ratio reversed and shrouded in stain-glass-like acrylics. The proud composure of Gainsborough's Blue Boy (1770) has given way to the sad-happy ambivalence of Lucky (2007); yet both works of art call to mind the sublime that human imagination can only probe. Lucky (2002), a mixed-media drawing in the Postmodern Art Gallery, served as the study for this postmodern self-portrait.